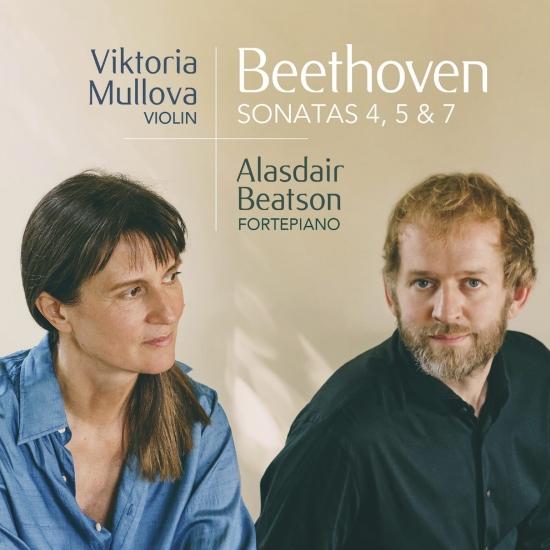 It’s a mere decade since Viktoria Mullova’s last recorded foray into Beethoven’s violin sonatas (9/10). Then her co-conspirator was Kristian Bezuidenhout; now it is Alasdair Beatson, playing a delicious Paul McNulty copy of an 1805 Viennese Walter fortepiano. In his brief explanatory note, Beatson identifies the intimacy and ‘shared subtleties of articulation and colour’ between the two instruments – Mullova’s gut-strung Guadagnini is addressed with a classical bow – which is appropriate to the music and exploited fully in this recording. Responsiveness to Beethoven’s detailed markings is a given in readings of this degree of acuity but the range of dynamics in both performance and recording (at Wyastone Concert Hall, very much the Potton Hall of the Welsh Marches) truly brings each moment to life. The opening of the C minor Sonata (Op 30 No 2) lours with a palpable sense of unease, while distant thunder in the piano’s left hand mars the sunny disposition of the SpringSonata’s first movement. The piano never becomes strident, though, retaining a vivid clarity in its bass range and avoiding hints of glassiness in the upper treble.

And Mullova’s playing, its strength and power resting on many years’ association with Beethoven and his music, strikes sparks off not only her piano support but also the sonic purity of her surroundings and the constant, still-challenging invention of each score. Her sound is rich but not creamy, and never lapses into mere beauty for its own sake. Her spectrum of tones, from the merest whisper to full-throated songfulness in lyrical passages, and range of nuance compel the attention throughout.
Among recent recordings of such extremely familiar repertoire, this one must surely rank among the finest. Will Mullova keep us waiting another ten or more years for her next sonata instalment?

Incredibly, it is ten years since Viktoria Mullova last recorded Beethoven violin sonatas – a scintillating coupling of Nos 3 and 9 with Kristian Bezuidenhout (ONYX 4050). In terms of their dramatic rethinking of texture, balance, articulation and expression, these performances form a vital part of the bracingly fresh interpretative emphasis on this music evinced by the likes of Faust/Melnikov (Harmonia Mundi), Ibragimova/Tiberghien (Wigmore Hall) and Sepec/Staier (Harmonia Mundi).

Recorded in July last year, Mullova, playing a 1750 Guadagnini with gut strings and a Ralph Ashmead classical bow, and Alasdair Beatson on a replica of an 1805 Walter fortepiano by Paul McNulty, immediately arrest attention with their account of the Op. 23 Sonata that captures its outer movements’ restless A minor hectoring and dynamic explosiveness. With Clive Brown’s new Bärenreiter edition to hand, there is a feeling of a fresh discovery both here and in the elusive, tonic major central Andante, poised between the carefree and hints of the forlorn. More than usual, one is made aware of the profound difference between this scherzoso interlude and the true (Adagio) slow movement of the Spring Sonata, composed at much the same time.

The C minor of Op. 30 No. 2 inspires the most impassioned playing, Mullova using an exquisitely subtle range of vibrato, from a gloriously pure senza to gentle inflections that both soothe and insinuate. Beatson articulates Beethoven’s occasionally menacing bass lines with relish and a palpable sense of opening the fortepiano’s expressive horizons.

Beethoven: Sonatas 4, 5 & 7 Review
★★★★★
by James Manheim @AllMusic
Read More
Some marketing materials are presenting this 2021 release as the second in a series of Beethoven violin sonatas by Viktoria Mullova, with the first being a 2009 recording of a pair of the sonatas by Mullova and fortepianist Kristian Bezuidenhout. That's a long interval between the two releases, and moreover, there's a new fortepianist this time, Alasdair Beatson, and a new fortepiano, a replica of an 1805 Walter model by builder Paul McNulty (Mullova once again plays her gut-string 1750 Guadagnini with a period bow). Most important, two more factors contributed to a deep rethinking of the three sonatas here by the two musicians. The first was the coronavirus pandemic, which slowed release schedules and gave them time to ponder the music, and the second was a unique new edition of the Beethoven sonatas by Clive Brown, a period performance expert who is convinced that performers of Beethoven's day would have added expressive devices not notated in the music. Brown's versions suggest but do not mandate new expressive details. All of these things add up to a Beethoven violin sonata of rare detail and power, recommended to everyone except those implacably opposed to historically oriented interpretations. The musicians seem to capture just how radical Beethoven was, even at this early stage of his career, with Mullova digging into her rough string sound (the Violin Sonata No. 7 in C minor, Op. 30, has rarely seemed to close to the brink of Beethoven's revolutionary discoveries), and Beatson catching the underlying shift between the piano's role as lead instrument (Beethoven still marked these works as being for piano and violin) and its new accompanimental role. In the Violin Sonata No. 5 in F major, Op. 24 ("Spring"), especially, almost every bar seems new. This is an essential Beethoven release from one of his great violinist interpreters.
Previous
Next
Back to Discography