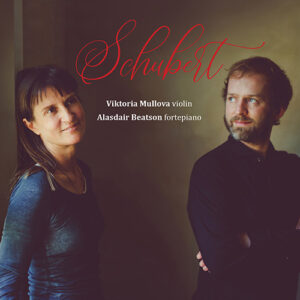 Viktoria Mullova and Alasdair Beatson present their first release with Signum Classics. The works presented on this recording span the final decade of Schubert’s life. Beginning with the Sonata in

It’s a mere decade since Viktoria Mullova’s last recorded foray into Beethoven’s violin sonatas (9/10). Then her co-conspirator was Kristian Bezuidenhout; now it is Alasdair Beatson, playing a delicious Paul McNulty copy of an 1805 Viennese Walter fortepiano. 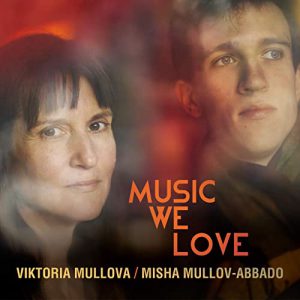 Double bassist Misha Mullov-Abbado is the son of violinist Viktoria Mullova and late conductor Claudio Abbado. Stephen Moss talks to mother and son about their new joint album, and their

Listening to these profoundly intimate performances is to be reminded how the evolution of both piano and violin has reshaped the way Schubert’s music is perceived. The sonic and sustaining power both instruments are now capable of (not to mention the enhanced size of performing venues) has resulted in slower rates of resonance-decay, a tendency to raise dynamic levels, and enhanced potentials for legato-cantabile via lashings of vibrato and portamento espressivo. To effectively play instruments such as Schubert would have recognised requires super-refined technique and boundless musical imagination – there is simply nowhere to hide.

To hear Alasdair Beatson’s exquisitely subtle rendering of the C major Fantasie’s opening oscillations, and the way Viktoria Mullova segues into the fluttering textures as though she is merely breathing on her strings, is to enter a world in which every tiny gesture is of vital significance. The following Allegretto is all the more poignant for not having its underlying sense of discomfort cushioned by washes of ambience, while the sublime Andantino variations third section is buoyed by Mullova’s and Beatson’s captivating warmth and meticulously articulated bonhomie.

They finish with the unnerving B minor Rondo brillant, its overtly dramatic nature often leading to it being played with an inappropriately Beethovenian menace. Here it emerges as a nerve-shredding sequence of differentiated musical imaginings, brought within terrifyingly close proximity of one another. In context, the major key coda sounds more like desperation than consolation.

It’s a mere decade since Viktoria Mullova’s last recorded foray into Beethoven’s violin sonatas (9/10). Then her co-conspirator was Kristian Bezuidenhout; now it is Alasdair Beatson, playing a delicious Paul McNulty copy of an 1805 Viennese Walter fortepiano. In his brief explanatory note, Beatson identifies the intimacy and ‘shared subtleties of articulation and colour’ between the two instruments – Mullova’s gut-strung Guadagnini is addressed with a classical bow – which is appropriate to the music and exploited fully in this recording. Responsiveness to Beethoven’s detailed markings is a given in readings of this degree of acuity but the range of dynamics in both performance and recording (at Wyastone Concert Hall, very much the Potton Hall of the Welsh Marches) truly brings each moment to life. The opening of the C minor Sonata (Op 30 No 2) lours with a palpable sense of unease, while distant thunder in the piano’s left hand mars the sunny disposition of the SpringSonata’s first movement. The piano never becomes strident, though, retaining a vivid clarity in its bass range and avoiding hints of glassiness in the upper treble.

And Mullova’s playing, its strength and power resting on many years’ association with Beethoven and his music, strikes sparks off not only her piano support but also the sonic purity of her surroundings and the constant, still-challenging invention of each score. Her sound is rich but not creamy, and never lapses into mere beauty for its own sake. Her spectrum of tones, from the merest whisper to full-throated songfulness in lyrical passages, and range of nuance compel the attention throughout.
Among recent recordings of such extremely familiar repertoire, this one must surely rank among the finest. Will Mullova keep us waiting another ten or more years for her next sonata instalment?

Music we Loveby Misha Mullov-Abbado (January 2020)
Read More
As I’m sure you can tell from our names and uncanny resemblance on the front cover I am Viktoria’s son. And so, for the first eighteen years of my life, we lived under the same roof and I was constantly being surrounded by the music she was practicing and performing, as well as the music that was being played at home through the speakers. Despite sharing a similar taste in music Viktoria and I now come from very different backgrounds or starting points musically, and whilst we both have improvised jazz and played lots of classical music at various point, the main strengths we have in our mother-and-son duo are Viktoria’s life-long career as a classical concert soloist and my steadily progressing life as a jazz musician and improviser. And so this album contains a whole variety of music that stretches over many genres that include classical music, contemporary jazz, Brazilian jazz, folk songs from different parts of the world, and some of my own music that is inspired by all of the above and written specifically for this project. Quite a lot of the music on the album is part of our concert programme as a result of us getting to know it together as a family, with personal connections to the songs sometimes going back as far as fifteen years from family holidays together. To put it simply the material on this album is all music we love.
Previous
Next