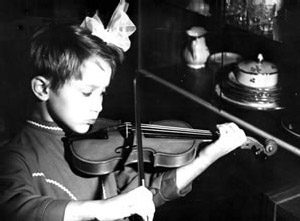 Viktoria Mullova studied at the Central Music School of Moscow and the Moscow Conservatoire. Her extraordinary talent captured international attention when she won first prize at the 1980 Sibelius Competition in Helsinki and the Gold Medal at the Tchaikovsky Competition in 1982 which was followed, in 1983, by her dramatic and much publicized defection to the West. She has since appeared with most of the world’s greatest orchestras and conductors and at the major international festivals. She is now known the world over as a violinist of exceptional versatility and musical integrity. Her curiosity spans the breadth of musical development from baroque and classical right up to the most contemporary influences from the world of fusion and experimental music.

Her interest in the authentic approach has led to collaborations with period instrument bands such as the Orchestra of the Age of Enlightenment, Il Giardino Armonico, Venice Baroque and Orchestre Révolutionaire et Romantique. Viktoria has a great affinity with Bach and his work makes up a large part of her recording catalogue. Her interpretations of Bach have been acclaimed worldwide and led Tim Ashley to write, “To hear Mullova play Bach is, simply, one of the greatest things you can experience…” in the Guardian. Her recent disc of Bach Concerti with the Accademia Bizantina and Ottavio Dantone has been highly praised and her recording of Bach’s solo sonatas and partitas represents a significant milestone in Viktoria’s personal journey into this music. The recording received 5-star reviews from all over the world and she has embarked on an international several season-long, series of solo Bach recitals.

Her ventures into creative contemporary music started in 2000 with her album “Through the Looking Glass” in which she played world, jazz and pop music arranged for her by Matthew Barley. This exploration continued with her second album ‘The Peasant Girl’ which she has toured around the world with the Matthew Barley ensemble. This project shows a different side to Viktoria as she looks to her peasant roots in the Ukraine and explores the influence of gypsy music on the classical and jazz genres in the 20th Century. This was followed by “Stradivarius in Rio” , inspired by her love of Brazilian songs by composers such as Antonio Carlos Jobim, Caetano Veloso and Claudio Nucci. A CD of the same name was enthusiastically received . As well as her own projects, she has also commissioned works from young composers such as Fraser Trainer, Thomas Larcher and Dai Fujikura. In 2017, Pascal Dusapin wrote his concerto for violin and cello, At Swim-Two-Birds for Viktoria Mullova and Matthew Barley, with them giving the premiere in Amsterdam followed by performances in London, Paris, Seattle and Leipzig.  This rich musical diversity has been celebrated in several high-profile residences, including London’s Southbank, Vienna’s Konzerthaus, the Auditorium du Louvre in Paris, Musikfest Bremen, Barcelona Symphony Orchestra and Helsinki Music Festival. Current projects include “Music We Love”; a duo partnership her son, bass player Misha Mullov-Abbado, featuring his original compositions, arrangements of Hebrew and Brazilian songs, jazz arrangements and works by Schumann and Bach.

Viktoria continues her collaboration with Alasdair Beatson playing Beethoven and Schubert on gut strings and fortepiano. During their three year collaboration they have released their first recording of Beethoven sonatas, recorded and released during the pandemic lockdowns; a second album featuring Beethoven and Schubert appeared in April 2022 and a further recording of Beethoven sonatas will follow.
The 22-23 season includes a tour of Japan in recital and concerto performances, a European tour with the Orchestre de la Suisse Romande and peformances with the RTE National Symphony Orchestra.

Mullova’s extensive discography has attracted many prestigious awards. Her recording of the Vivaldi Concertos with Il Giardino Armonico and directed by Giovanni Antonini, won the Diapason D’Or of the Year award for 2005 and her recording featuring Beethoven’s Op.12, No.3 and Kreutzer Sonatas with Kristian Bezuidenhout won immense critical acclaim. Other discs have included the Schubert Octet with the Mullova Ensemble, “Recital” with Katia Labèque, Bach Sonatas with Ottavio Dantone,“6 Solo Sonatas and Partitas” by JS Bach and the complete works for violin & orchestra by Arvo Pärt with the Estonian National Symphony Orchestra and Paavo Järvi. Recent releases include “Music We Love” with Misha Mullov-Abbado, and Beethoven and Schubert with Alsadair Beatson.

Viktoria either plays on her ‘Jules Falk’ 1723 Stradivarius or a Guadagnini violin from 1750.

For the most up-to-date biography, please contact us.
This biography should not be edited without permission from Askonas Holt.
April 2022