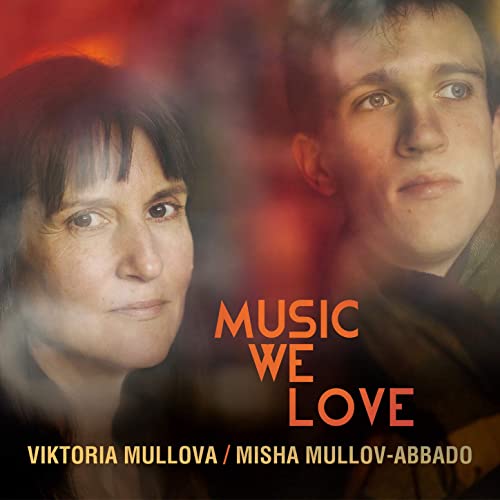 Violinist Viktoria Mullova and son, the bassist Misha Mullov-Abbado in music they love – a very personal and affectionate collection of music ranging from traditional Brazilian folk songs to JS Bach, via Antonio Carlos Jobim and Schumann.

Much of the music on this album has been played by mother and son together for many years – classical and contemporary jazz, folk songs from family music making has now made it to their concert programmes.

“As I’m sure you can tell from our names and uncanny resemblance on the front cover I am Viktoria’s son. And so, for the first eighteen years of my life, we lived under the same roof and I was constantly being surrounded by the music she was practicing and performing, as well as the music that was being played at home through the speakers. Despite sharing a similar taste in music Viktoria and I now come from very different backgrounds or starting points musically, and whilst we both have improvised jazz and played lots of classical music at various point, the main strengths we have in our mother-and-son duo are Viktoria’s life-long career as a classical concert soloist and my steadily progressing life as a jazz musician and improviser. And so this album contains a whole variety of music that stretches over many genres that include classical music, contemporary jazz, Brazilian jazz, folk songs from different parts of the world, and some of my own music that is inspired by all of the above and written specifically for this project. Quite a lot of the music on the album is part of our concert programme as a result of us getting to know it together as a family, with personal connections to the songs sometimes going back as far as fifteen years from family holidays together. To put it simply the material on this album is all music we love.”

This new disc from the mother and son duo may be tricky to categorise but it is nonetheless a delight. Best known as a celebrated classical soloist, violinist Viktoria Mullova also has a growing reputation as an inventive musical collaborator and here joins forces with her double bassist son, a star of the jazz world, in this imaginative new release.

‘Music We Love’ could seem a bit of a cop-out as a theme, but the disc has a certain coherence despite its eclecticism, containing as it does everything from classical music, contemporary jazz, Brazilian jazz, folk songs and new works by Mullov-Abbado himself. For one, the blend of double bass and violin duo sounds like nothing else. The pairing at times feels spare and melancholy, such as in the duo’s intuitive account of Schumann’s ‘Träumerei’, but on other occasions feels as full and varied in timbre as a much larger ensemble, as in the exuberant O Cabo Pitanga by Brazilian jazz musician Laércio de Freitas. Other highlights include Brazil, a rhapsodic new work by Mullov-Abbado which opens with a slow, expansive violin solo before spinning off into an increasingly lively jazz number, while Sumera’s Theme from Spring Fly floats along with exquisite poise. Not every track quite comes off – the Adagio and Allegro from Bach’s Sonata No. 1 for Violin & Harpsichord feels a touch laboured and heavy – but this is for the most part a highly enjoyable disc with all the key qualities of a good mixtape: full of hits and surprises, and made with love.

Music We Loveby Katherine Cooper @ PrestoMusic
Read More
I loved the stark simplicity of Mullov-Abbado’s The Linden Tree on the Hermes Experiment’s Here We Are (an Editor’s Choice in July), and there’s a similar sparse beauty to everything on this eclectic recital with his violinist mother, which encompasses Bach and Brazilian folk-songs as well as three of his own compositions – the Kreisler-ish Little Astronaut waltz is a gem. Their louche, jazz-inflected take on Schumann’s Träumerei won’t be everyone’s cup of tea, but it worked for me.
Viktoria Mullova, Misha Mullov-Abbado, Fidelio Orchestra Cafe review - a rainbow of brilliant artistry
★★★★★
by David Nice @ theartsdesk.com
Read More

There should eventually be a plaque on the outside of the Fidelio Orchestra Café in Farringdon, to the effect that London’s musical life after lockdown re-ignited here. And how, in early July, with Steven Isserlis exuberantly stepping up to play Bach before a rapt small audience.

Even now that so many venues have started cautiously opening up, it was still a physical and emotional jolt of the best kind to hear another of the greatest string sounds in the world, that of violinist Viktoria Mullova, and the double-bass thrumming in the resonant woody space of her son Misha Mullov-Abbado at the prescribed two metres’ distance/closeness.
What’s changed since the summer? The fact that concerts now begin in candlelight, and half an hour earlier, at 7pm, to accommodate a prompt 10pm closure; no more, for now, the kind of spontaneous post-event joy in playing ever more, such as happened when Pavel Kolesnikov and Samson Tsoy played violin sonatas with Alina Ibragimova into the small hours. But every guest appearance has its own distinct flavour, and this one, following on the heels of a recording, saw mother and son playing together live for the first time this year.

Listened to attentively before the usual excellent meal served by Alan Rosenthal, the programme was ideal for the space and ambience: a mix of mellow, visceral and even profound. Mullov-Abbado, despite his Italian-Russian parentage, is a cool young London dude recently graduated from the Royal Academy of Music, very likable; his compositions are sui generis, no pale crossover between classical and jazz. Some are easy to grasp, but not long in to the concert, Brazil gave us an edge-of-seat unpredictability which reminded me of the quartet works of Caroline Shaw. There’s total musical unanimity between bass and violin, with some heart-leaping synchonisations in changing rhythms and missed beats. Mullova, as always, seems cool if you just look at her, but the sounds tell a different story; when she speaks, it’s with a rather beautiful intonation and a shyness which seems to seek backing from her son. Mullova and Mullov-Abbado in the Fidelio Orchestra CafeThere were two very different cores to the repertoire: the faster movement of two from Bach’s B minor Sonata, in which Mullov-Abbado’s fast and furious realization of the bass meeting the lyric line above proved phenomenal, and one of the Brazilian numbers which punctuated the evening, Caico, which Mullova cited as being especially close to her heart; the way she played it, with inward beauty, proved the point.

Her son’s composing has exuberant wit, too: impossible not to laugh out loud at his audacity in the mad waltz of Little Astronaut. Its counterpart in the post-dessert encore, Estonian composer Lepo Sumera’s pastiche waltz for the cartoon Spring Fly, proved almost as wacky in the interpretation. I’ve probably heard that piece more than any other in live performance over the past decade, thanks to Paavo Järvi’s use of it as an encore calling-card with his Estonian Festival Orchestra at least twice every Pärnu Festival. Which is where Mullova, having given a phenomenal interpretation of the Sibelius Violin Concerto there, first heard it. She and her son gave it a wonderful twist last night, and then embraced with obvious joy, cheek to cheek. No doubting the warmth in all that; and I could happily sit through the whole thing again.

Previous
Next
Back to Discography