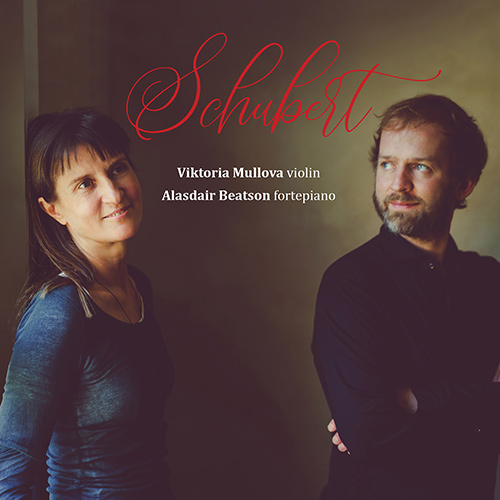 Viktoria Mullova and Alasdair Beatson present their first release with Signum Classics. The works presented on this recording span the final decade of Schubert’s life. Beginning with the Sonata in A of 1817, its lyrical, wistful opening giving way to a Viennese joy and exuberance. Closing with the Rondo in B minor of 1826, thrilling in its heroic journey through an abundance of themes, with twists and turns almost competitively athletic between the two instruments. At the heart of the recording, the Fantasie in C of 1827 – a music unutterably inspired, ravishingly beautiful, a tour de force of colour and texture, an unpredictable and unparalleled dreamlike vision of another world.

Viktoria Mullova is known internationally as a violinist of exceptional versatility and musical integrity. Her curiosity spans the breadth of musical development from baroque and classical right up to the most contemporary influences from the world of fusion and experimental music.

Scottish pianist Alasdair Beatson works prolifically as a soloist and chamber musician. Renowned as a sincere musician and intrepid programmer, he champions wider repertoire with particular interest in Beethoven, Schumann and Schubert among others.

Violinist Viktoria Mullova talks to Toby Deller about her eclectic musical collaborations, mastering the art of improvisation, experimenting with technique, and her new Schubert recording with pianist Alasdair Beatson

Schubert’s music is particularly poignant because it sounds like it is trying to reassure us that everything is going to be OK, without quite hiding the likelihood that it won’t. That, anyway, is how I put it to Viktoria Mullova, whose latest recording is dedicated to the composer. ‘I think it’s up to the listener to find out for themselves how it speaks to them,’ she gently rebuffs, as we discuss the composer in the calm surroundings of her London home when we met in January 2022. ‘For you it’s like that; for some people, it’s probably different.’

Comprising the Fantasie in C major D934, the A major Violin Sonata D574 and the B minor Rondo D895, it is the second album she has made with pianist Alasdair Beatson, following a selection of three Beethoven sonatas, and her first on the Signum label. But it is not her first Schubert recording. She tackled the Octet on a 2005 release with her group the Mullova Ensemble, and she included the Fantasie alongside Clara Schumann, Stravinsky and Ravel on a 2006 album with Katia Labèque. This time, however, she is playing on gut strings and with a fortepiano. But the passing years and the new set-up have not changed her appreciation for the music. ‘Schubert is one of my favourite composers,’ she says. ‘I love the intimacy of his music, its melancholy and sadness with a smile.’

Her fondness for its introversion and delicate moments is reflected in her creative inspirations away from music. When I enquire about these, she quickly reaches across the table for a decorative item that turns out to be a piece of bark, its texture and curvature making it a natural found object. She gestures towards a small posy of wild flowers she has arranged in a vase – another source of inspiration. ‘I love creating beautiful things in the house, in the garden. I very often look around for creative ideas, whether it’s nature or something I admire and which gives me inspiration.’

Had we met several weeks later, thus after Putin’s armed forces had invaded Ukraine, the atmosphere would surely have been less calm. Mullova is three-quarters Ukrainian (though she was born in Moscow) and famously defected from the Soviet Union in 1983. ‘It’s so painful for me to see what’s happening to the people and the land of Ukraine,’ she told me at a later date, ‘and to see the ignorance of the Russians who are supporting a dictator.’

She did speak, however, with a mixture of delight and pride at the eclectic musical tastes and interests shared by her family. One daughter, Nadia Mullova-Barley, is a dancer with The Royal Ballet; her elder daughter, Katia Mullova-Brind, is a DJ in Berlin. Meanwhile, her son, Misha Mullov-Abbado, is a well-established jazz double bassist with whom she made the 2020 album Music We Love, a collection of songs and arrangements, both classical and non-classical, with which they have a personal connection.

Mullova’s Schubert recital adds to a discography that stretches back over more than 35 years. While the mainstream 20th-century concertos – Sibelius, Shostakovich, Bartók, Prokofiev – are one area of focus, she also has a strong interest in Baroque and Classical repertoire played with specialists in those areas. And in lieu of recording many new commissions or any classical ensemble chamber music other than the Schubert Octet, there are non-classical collaborations dating back to her album Through the Looking Glass. Released in 2000, it comprises music by artists such as Miles Davis, Joe Zawinul and Jaco Pastorius of Weather Report, the Bee Gees, Alanis Morissette and Youssou N’Dour.

‘I would get bored if I were to play only classical repertoire, like for example the Brahms and Tchaikovsky concertos,’ she says. ‘Nothing against Brahms! In fact, I was looking at my home videos recently and saw myself rehearsing Brahms sonatas, and suddenly I really craved starting to play them again. I haven’t played them since I recorded them with Piotr Anderszewski in 1995. But I like the variety in music, whether I am listening to it or playing. In the early 90s, I immersed myself in Baroque music, and since then I’ve met and worked with many wonderful musicians who have helped me to understand this new language of music making.’

She even acquired a second instrument for Baroque and Classical repertoire – a 1750 Guadagnini to go with the 1723 ‘Jules Falk’ Stradivari she already owned – to make switching between set-ups more manageable. Having the second violin meant she could experiment with programmes involving both instruments. ‘I started to build programmes of solo Bach together with contemporary music, with two instruments on stage. That was interesting, but very hard, both physically and because it’s a different technique and feel – a different pitch also. I think it was interesting for the audience to see and hear two different instruments, two different sets of strings, two completely different sounds.’..